This week, we have the 4/30/13 issue of Wine Spectator and some fun stuff from the Washington Times and Snooth.com. 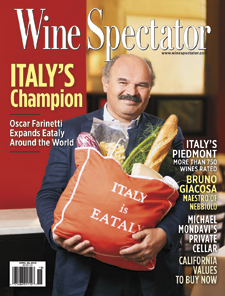 The big stories in the Spectator, the magazine everyone loves to hate, are the Piedmont wines of Italy and value wines from California.

First, at the front of the book we have James Laube’s column about the age of corks being over. Not much romance in screw caps, but far less in corked wines, I’d say.  It does seem to be a good trend that more and more premium wines are going to screw caps. (Which James prefers to call “twist-offs.” It’s all in the branding …)

For value wines from California, we are urged to look beyond Napa to Mendocino, Paso Robles, Santa Barbara, Sierra Foothills, and Sonoma County. The wines all score between 85 and 93 and carry prices mostly between $16 or $18 and $25. The list includes some big, easy to find bottlings and others you may have more difficulty sourcing.

Piedmont may be the red-headed stepchild to Tuscany’s prodigal son, but wine lovers willing to explore here are rewarded with the wonders of the Nebbiolo grape, Barolos and Barbarescos. The 2008 Barolo vintage scores a 94 overall with a long list of bottles above 95. (And carrying three-digit price tags.) Values tend to fall between $25 and $40.

Washington Times
There’s a fun piece on the Washington Times websiteabout the science behind the seductive nature of wine. Apparently, research done by an Australian vintner, surgeon and author, Dr. Max Lake, has found that some wines’ aromas resemble the human pheromones that are purported to arouse the opposite sex.

“The mature cabernet sauvignon has an essence which is as close to this natural sexual turn-on as one could hope for.”

That should make it easier to close the sale on cabernet by the case this weekend.

Snooth.com
Two articles on Snooth.com this week that may have caught your clients’ eyes. First, values from Chile. The focus is on Cabernet with very accessible price points. Some nice tasting notes on the site for the following:

Then, more fun: bad wine smells and how to identify them. Everything from TCA to oxidation …

Posted in What They're Reading | Comments Off on What They’re Reading – Wine Spectator, Washington Times and Snooth.com