Sometimes, your business is affected by things outside of your control. How you handle them is largely a matter of being prepared for the unexpected. [level-members]

The owners of Exxon gas stations – who are mostly independent small business owners, not Exxon employees – had their livelihoods threatened in the wake of the Exxon Valdez disaster as consumers called for boycotts of Exxon. (Not realizing it wasn’t just Exxon they were hurting.)

Similarly, BP station owners, who like the Exxon station owners are mostly small business owner with a license agreement to sell the BP’s product – were hit after the more recent disaster in the Gulf of Mexico.

What does this have to do with you? Well, what if you sold this man’s wines? 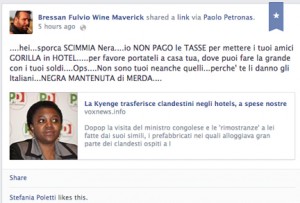 Click the image above to the full story on Vinography.com. I won’t translate the comments here, but suffice to say that they are pretty repugnant to most of the world.

Clearly, wine doesn’t have the impact in our lives that gas and oil do, and even the biggest wine conglomerates are tiny in comparison to the global energy giants, so there will never the same level of consumer awareness for something like this.

But you should still be sensitive to issues your audience might raise.

South Africa, twenty or 30 years ago, was a bit of a hot topic. Did you sell South African wines then? Could you justify their place in your shop.

There’s nothing wrong with disagreeing with a customer – the customer is NOT always right – but how you disagree is important. I would defend South African wines by pointing out that the vineyards and wineries have an important positive impact on the South African economy, and that they create thousands of jobs.

In the case of Bressan Fulvio, I think I’d pull the wines off the shelf immediately. I don’t think I’d go so far as to make a public statement about it. (See our thoughts here on local politics.) But if anyone asked, I’d would certainly explain myself as thoughtfully as possible.

So, do you have a plan in place to address the legitimate (and not so legitimate) “social responsibility” issues that will arise from time to time? You should, and it should balance your personal beliefs, your shop’s profits and your responsibilities as a member of your community.

Most importantly, stay plugged in. Know what’s happening in the world related to your business. If the owner of a major wine conglomerate suddenly becomes active in fringe politics, be prepared to address it. Or atrocities against some group occur in Greece or Spain or Italy or some other major wine-producing region, follow it closely enough to defend your decision to sell – or stop selling – that wine.