« Mushroom and Emmental Sandwich: Worth the Effort
Wine Shop Customer Experience – The Importance of Follow Up »

Voters in Tennessee will get to choose this fall whether to allow wine sales in grocery stores. And New York rolls out a new Taste NY campaign to promote wine and spirits produced in the state. [level-members]

The change won’t take place until mid-2016, but will allow wine to be sold in grocery stores across as many as 78 communities in the state. (Each needs a majority vote in favor; it’s not an all-or-nothing statewide vote.)

As the article says, “Surprisingly, neither the effort nor the question on the ballot garnered organized opposition from either churches or mom-and-pop liquor stores. Organizers of the wine-in-stores movement had made an early compromise with liquor store owners: Liquor stores could begin selling food and beer last July, but wine won’t go on grocery shelves until July 2016 to give liquor store owners time to prepare to compete with grocery store chains.”

That’s an interesting route around the usual opposition from retailers, though it seems pretty short-sighted. If you are a smaller version of the big store – selling the same items – then you’re unlikely to compete on price and you’re very likely reducing your audience to convenience shoppers – those people on whose paths to and from work and home you are located.

Tennessee is poised to become the 37th state that allows wine in retail food stores. One more reason to be sure you’re focused on a higher level of service, more interesting selection, and better customer experience than bigger, generalist retailers.

Meanwhile, back in New York state, they are rolling out the Taste NY campaign that features local wines, spirits, and hard ciders. The pilot begins in 6 stores around the state and will expand to “dozens more” in the near future. 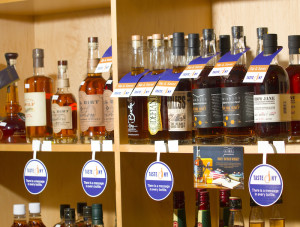 « Mushroom and Emmental Sandwich: Worth the Effort
Wine Shop Customer Experience – The Importance of Follow Up »